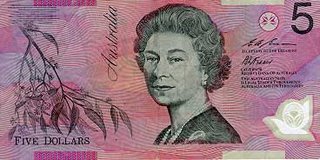 One day I was at Metro Church, and the offering was being taken-up. Instead of putting my offering in the container that was being passed around, I felt led to give $5 to my nephew David, after the meeting.

When I gave it to him, his face lit up. He told me that he had spent five dollars on a present for his mother, and from memory, I think he'd made a point (by faith) of seeing what the outcome would be.

And now I approached him, telling him that the Lord had led me to give him that very amount. He thought it was amazing.
Posted by John at 6:11 pm